Physics plays an important role in the work of artists Paul Vendel and Sandra de Wolf, often in the form of wild-growing, futuristic structures.

The influence of science fiction can also be seen in their installation Whole Hole (2017). This work consists of hundreds of LED strips, which are normally used as Christmas decorations because they remind you of melting ice or falling stars.

Faster than light
Those who enter Whole Hole are pulled into a kind of wormhole in which you move faster than light. You travel to another place in space or even to a parallel universe, like Alice who accidentally ended up in Wonderland after she fell into the rabbit hole.

Journey of existence
But those who boat through Whole Hole also make the journey of existence, which begins and ends with a movement towards light: a baby that is born sees the light of day, and whoever dies sees the light at the end of the tunnel. If you look closely you will see that the water in the canal plays an essential role: the reflection on the surface completes the half arch of the bridge into a full circle.

Artists Paul Vendel (1964) and Sandra de Wolf (1966) have been working together since they met during their studies at the Gerrit Rietveld Academie, more than 30 years ago. Their work, mostly installations, is often located in (semi) public spaces and is usually made especially for that location.

The artists favour the use of recognizable and existing objects or materials, such as umbrellas, cutlery, Styrofoam and even duckweed. For Vendel and De Wolf their work does not have to be instantly recognizable as art, they strive to appeal to a wide audience. 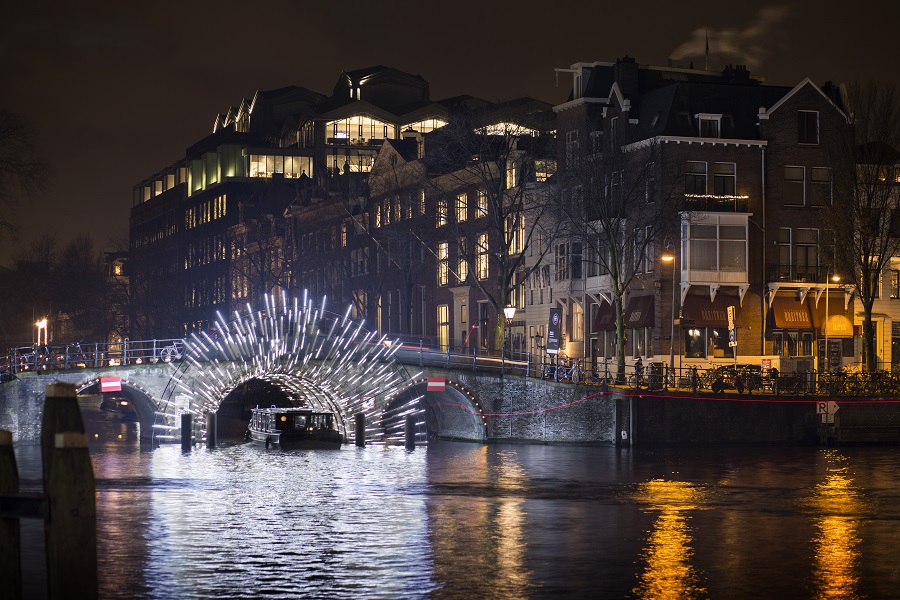 Those who enter are pulled into a kind of wormhole in which you move faster than light.